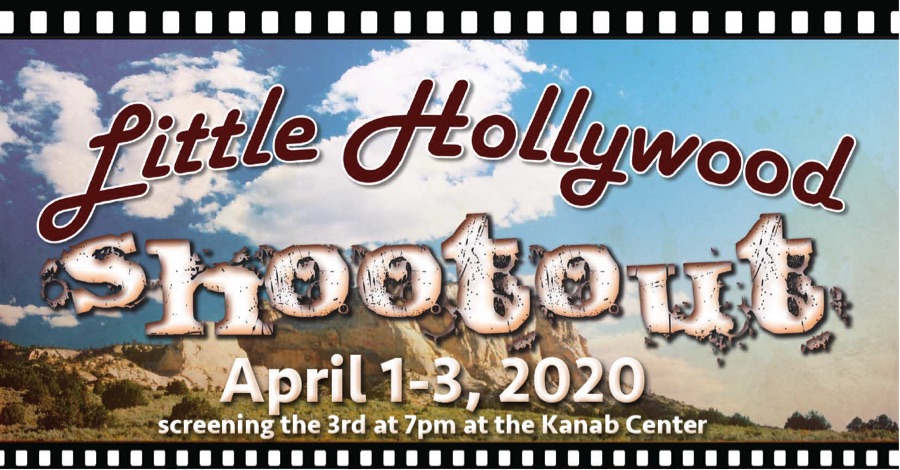 KANAB, Utah –The Kanab area has been a favorite destination for filmmakers since the 1920’s. Building on this great filmmaking tradition, the annual “Little Hollywood Shootout,” kicks off at the historic Parry Lodge in Kanab, Utah on April 1-3, 2020. The “shootout” is a quick-turnaround film competition offering prospective filmmakers the challenge of producing a short film with Kanab area locations as the backdrop.

The competition starts on Wednesday, April 1, 2020 at high noon where film production requirements including locations and a theme will be revealed to participants. Competitors will then have 49 hours to write, direct, edit, and complete a five-minute film. Film submissions are due at 1:00 pm on Friday, April 3, 2020 either in person or online. The shootout films will then be premiered at a community screening and awards ceremony in the evening on Friday, April 3, 2020 at the Kanab Center.

“The shootout is the thunder dome of quick turnaround film challenges and we’re excited for the 2020 shootout,” commented Kane County Film Commissioner, Kelly Stowell, organizer and founder of the event. “The shootout provides an opportunity for aspiring filmmakers to produce a film where film legends have also worked,” explained Stowell.

Prospective filmmakers of all ages from beginners to veterans are invited to take part in the challenge. Primary filming locations are required to take place in Kane County but editing and post-production can take place at the participants desired location. Two divisions are available for participants with one category intended for novice filmmakers of all ages looking to gain experience and the other division is geared for competitors who have more experience in film production.

Sponsors of the event include Kane County Office of Tourism and Film Commission, Center for Education, Business, and the Arts, Kanab City, and the Utah Film Commission. “This event would not be possible without our sponsors and we appreciate their tremendous support of the shootout,” said Stowell.

Festivities of the Little Hollywood Shootout conclude with a film screening and awards ceremony showcasing submitted films in the evening of Friday, April 3, 2020 at the Kanab Center. Community members and participants are strongly encouraged and invited to attend. For more information about the Little Hollywood Shootout or to register your team, visit www.littlehollywoodshootout.org or call 4358990443.